Great Pyramid Sews Numbers Five and Six Together. How and Why? The why is easy: Five personifies yin while six is the essence of yang. The coming together of yin and yang in balance is an ancient, oriental theme. Yet, it has found its way to the Middle east and Egypt in surprising ways.

First I reference, The View Over Atlantis by John Michell. Born in London to a wealthy family, Michell was educated at Cheam School and Eton College.  He served as a Russian translator in the Royal Navy  and attended Trinity College, Cambridge, He returned to London and worked for his father’s property business, developing an interest in Ufology. Embracing the counter-cultural ideas of the Earth mysteries movement during the 1960s, in The Flying Saucer Vision he built on Alfred Watkins‘ ideas of ley lines by arguing that they represented linear marks created in prehistory to guide extraterrestrial spacecraft. He followed this with his most influential work, The View Over Atlantis, in 1969.

How is it that the Great Pyramid Sews Numbers 5 and 6 Together?

Consider the Reverse Number Combination of 56

Five successive powers grow out of the Golden apex of volume 5 cubic inches . See pages 99 -100 in the pictured book for the explanation.  By the time 56 gets to the fifth power, the side of the base becomes, 25,088 miles. Earth’s diameter was always taken at 25,000 miles by the ancients. This becomes one manner in which five and six (56) as yang and yin a joined by the Great Pyramid. 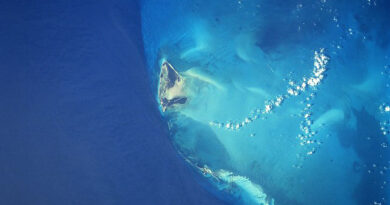 Bimini Pyramid Stump – What Does it Reveal?